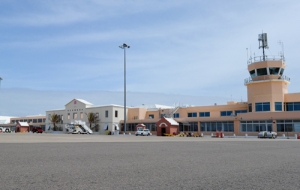 How to gently put this? Perhaps it is time to improve our experience at Bermuda’s L.F. Wade International Airport either through privatization or better training.
I write this after completing an epic journey from Bermuda to Boston.
Normally the trip takes two hours.  Unless someone screws up. Then it takes 12.
Already delayed by weather issues, we boarded DELTA flight 560 on Thursday for immediate take-off. But 30 minutes later we were still on the ground. Finally the public address system crackled to life and I think I can speak for all of us when I say no one could have predicted what we were about to hear.
“Ah, ladies and gentlemen,” began the captain, and I am loosely paraphrasing here. “It seems someone has jammed the outside staircase into the rear door of the plane and now it’s bent.” Right. I saw the captain actually come back into the cockpit after assessing the damage himself and briefly wondered if he could actually fly that plane with its rear door opened just a smidgen. As if reading my mind he returned to the airwaves and informed us that our flight was indeed cancelled.
Now you would think that a lifeboat of airport personnel would be standing by at the ready with alternative flights and apologetic words. Nope.
One young woman stood at the desk. She refused to speak or make eye contact but had a phone clamped to her ear perhaps as protection against the frustrated crowd swelling in front of her.
I was second in line. “Can you please get your supervisor,” I asked.
“I am trying to,” she said. “Can you just start re-booking us yourself then?” I asked. “I have to get someone to tell me what to do?” That says it all, doesn’t it? As passengers we all knew what to do and we don’t even work for the airline. There were now just two flights that could get us to Boston.
One through New York and the other through Atlanta.
My husband decided to just call DELTA himself and then put that representative on the phone with the lone Bermudian agent in order to finalize our new reservation.
But I had to wonder, why had this poor thing been abandoned? Why had we? Where were the supervisors with their announcements, mea culpa’s and maybe free cups of coffee? Where was the service in this service industry? More compelling: how did this “accident” happen in the first place? Was the crew inexperienced or careless? Both scenarios are bad.
A total of 25 minutes went by until our silent sentry was able to muster reinforcements.
By then a fair number of passengers had just called DELTA themselves much like we had done. The rest waited in line for hours.
Our next flight was delayed to accommodate them all and so we, of course, missed our connection.
But at least we had Bermuda’s assurance that our luggage would arrive with us. Why wouldn’t it? They did have almost four hours to get our bags off the damaged plane and onto the new ones. Suffice to say we flew on Thursday. We got our bags on Saturday.
Flight attendants were still talking and joking about the incident when we flew back to Bermuda on Monday.
I spoke to one right after the incident: “I have never heard of such a thing,” she said. “Do you know how much it’s going to cost to get the new parts in? And they can’t use that plane. That’s a lot of money.” And her assessment does not even take into account the human factor: the disappointed and angry passengers left scrambling for their next flight.
To their credit, I did not hear one passenger throw a nutty, but plenty complained or rolled their eyes.
Everybody has an airline nightmare story. There are many that are much worse than this one.
But I’ll bet that in each case words of consolation from the people responsible for the mess always helped.
Even though they were not even to blame, both DELTA in New York and USAIR in Boston had personnel that could not have been more apologetic or helpful.
I even got a free package of PRINGLES.
A U.S. representative from DELTA actually distributed an email offering free air miles to make up for the disaster.
But in Bermuda there was not a word of sincere apology or even personal interest. Shocking, on an island where politeness and proper behaviour are revered.
New York and Boston are notorious for their brash citizenry. But on that day they were efficient, empathic and energized to help.
In short, they were what they were trained to be: pros. Bermuda could take a page out of their book.